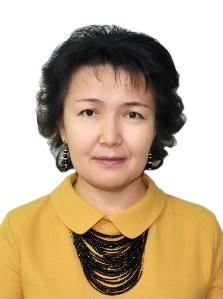 Description of research work and area of teaching:

– The developer of 2 fundamental projects of the Ministry of Education and Science of the Republic of Kazakhstan “Theory and methodology of ethnopedagogics of the people of Kazakhstan as the basis for strengthening interethnic harmony and stability in modern socio-cultural conditions” (2009-2011);

– “Theoretical and methodological foundations for the professional development of scientific and pedagogical personnel at the stage of postgraduate education” (2012-2014);

– Developer of 3 applied projects (grant of the rector of KazNPU named after Abai) “Formation of innovative content of postgraduate education based on the development of new generation teaching aids” (2010);

Innovative methods and forms at the university, digital resources.

More than 360 scientific publications, including 22 teaching aids, monographs, electronic textbooks, 18 certificates of state registration of rights to a copyright object.

Anniversary medal “For contribution to the development of the university, the 90th anniversary of KazNPU named after Abai” 2018,